“Never doubt that a small group of thoughtful, committed, citizens can change the world. Indeed, it is the only thing that ever has.”  Margaret Mead 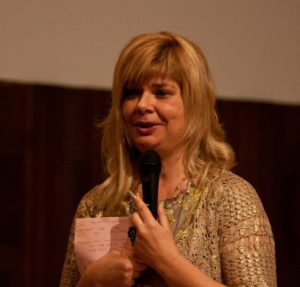 Dragana Djurkovic graduated from the Faculty of Languages, University of Belgrade in 1986, and obtained her MA in Educational Management at Faculty of Philosophy, Novi Sad, in 2010. During this period, she has enhanced the skills she had gained in twenty-year-long career as an educational institution founder founder and director, which include: essence of significance of management in the process of education; task, characteristics and socio-economic dimensions of pedagogical management; functioning of educational institutions; position of pedagogical manager as a visionary and a creator of educational policy development, career development of employees. She has participated in a number of workshops and training sessions related to the topics of leadership, overcoming violent conflict, skills for improving quality of life, parenting skills and skills necessary for building partnerships. Life in USA and France has taught her to recognize and embrace the values of multi-cultural environment, and motivated her to develop these views in Serbia. Through running of an educational institution that deals with young people in the past 25 years, she worked on spreading knowledge and bringing innovations despite difficult political situation and years of cultural and educational isolation.

Nevena Tasić, Head of Studies and  Coordinator of Projects 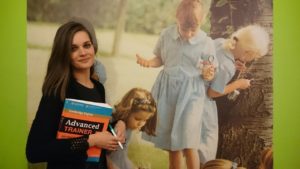 Nevena holds a BA in Business and Economy, Faculty of Business Economics, Novi Sad. She has also completed the highest Cambridge certification level and was granted a Certificate in Proficient English (CPE) which qualifies her to teach all English language levels close to native equivalent. She has worked for past 8 years in New Visions School making progress from being  an assistant Project Coordinator on Youth projects and a children, junior and high school teacher of English language to the Director/Head of studies position . In addition to the mentioned above, she was named a Head of Learning abroad department and has experience in leading groups of students to the United Kingdom on a two week summer school camp. As an assistant on projects, she worked with NVS team on summer camps in Prague and Žabljak which were a 3-week language and culture camps for young people. Prague being camp based on interaction of students from post-conflict territories of Serbia, Bosnia and Croatia, and Žabljak being the first step to improving educational system within rural areas . Having lived and completed education in the USA for almost two years, her experience in an educational system of that kind has brought the possibility of implementation of it in the Serbian educational system.  She also assisted in organizing Drama clubs, Teen leadership workshops and competitions for our students. Furthermore, she assisted on a few projects outside of New Visions School, such as an initiative “Active Miss Wanted Now” supported by Olof Palme Centre intended for enhancing political and social activism of young female high school students from rural areas in Vojvodina. She also participated in a youth training by Youth Dialogue Centre in Novi Sad for promoting dialogue between youth from Serbia and Kosovo and European football championship under 17 by UEFA and Serbian Football Union as a volunteer and translator directly on the field. 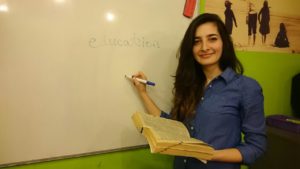 Nataša graduated from Faculty of Philosophy, Department for English Language and Literature and currently on her master studies. In 2014 she spent half a year in the USA perfecting her English skills and learning about western culture. She gained experience in online teaching by working with business and general English clients for foreign online teaching companies. Apart from teaching, her previous working experience includes a project coordinator/translator at the international basketball cup for cadets in Sarajevo in 2012 and other minor sport events, and a volunteer at the American Corner in Novi Sad.  She has been a member of NVS team since September, 2015, and ever since she has worked with very young children, children, juniors, high schoolers, adults, college students groups and students preparing for Cambridge ESOL exams. She is interested in language teaching methodology and psychology and actively works on experimenting and implementing different teaching methods with different levels and age of ESL/EFL students in NVS, as well as on projects development.

Sonja Segić, Teacher.  Holds her  MA in French language and Literature from Faculty of Philosophy, University of Novi Sad. She has passed the CAE Cambridge exam with grade A, C2 Ability. She has been working as a teacher at NVSE since October 2015. She is preparing students for ESOL exams PET, FCE, TOEFL, CAE and for BEC (Business English Certificate). She has been teaching English for last 5 years. She has participated in the training for teaching  preschool kids and young learners , and taught English as a second language to preschool kids for 2 years. In 2012 she participated in FETLYF (High school theatre festival in French language) in Saint Malo (France) and won the audience award with the role- play performed by students from  J.J. Zmaj High school. In 2013, she collaborated with the famous theatre director Voja Soldatović, and won the first prize in Sorrento festival of high school theatre in French language (Italy). As a teacher of French she is a certified examiner for A1 and A2 DELF exams in French language, for both juniors and adults.

Dzenana Huseinovic- graduated from Faculty in Philosophy in Novi Sad, department of English Language and Literature in 2005, and obtained a Master’s Degree at the same faculty, Literature Department in 2010. She has participated in Exit 2000, Serbia’s united NGO campaign for fair elections in 2000, took position of English teacher for the underprivileged within Telecentar project carried out by NGO Novosadski Humanitarni Centar (Novi Sad Humanitarian Centre), took part in a number of activist movements such as Initiative for Social Center recently started in Novi Sad, and other smaller ventures in the field of democracy, charity and social activism. While at her posts in Exit Festival and New Visions School, she has been in charge of human resource coordination, project and department coordination, emotional education of teenagers, creative workshops.BOJAN Pucelj-  BSc. sociologist, a Certified Transactional Analyst in pedagogy and adult education and special educator and supervisor of the European (EATA) and International (ITAA) in Transactional Analysis Association (Teachers PTSTA status) from Celje, Slovenia.

Milana Todoreskov, Teacher and Project Coordinator worked as a Project Assistant at Organization for Security and Co-operation in Europe (OSCE), Law Enforcement Department, Field Office Novi Sad at providing assistance in the development and implementation of project activities related to police reform in Serbia; Providing interpretation and translation services; Providing administrative and clerical assistance to the Law Enforcement Department’s programme managers and advisers; Conducted training for national and international staff in rules and procedures relating to the municipal elections in Kosovo, 2002.; Assisted Core Supervisor in managing training logistics and administrative matters.; Provided oral and written translation for international staff; She has also worked as a Training Assistant at an UN Office of Human Resources Management, Learning Service, New York where she assisted in organizing training programmes, in developing new projects in connection with training, managed logistics to ensure smooth delivery of training activity, managed administrative matters, such as travel arrangements and invoicing of consultants

Predrag Miljanovic – Physician, neuropsychiatrist, REBT psychotherapist and associate fellow of the Alber Ellis Institute NYC. From 1991-1999, he acted as program director of the Association for Mental Health Protection of War Veterans and Victims of War. Now supervisor of the Trauma Center Novi Sad, he has practiced medical and psychotherapy work with traumatized people in Bosnia, Croatia, and Serbia since 1991. Has worked with Serbian, Croatian, and Albanian war veterans, including multi-ethnic seminars.

Selena Tasic- Journalist,  graduated from the Department of Media Studies at the Faculty of Philosophy, University of Novi Sad. The title of Master of Political Science and International Affairs, Department for International Security, she acquired at the Faculty of Political Sciences in Belgrade. Currently on the position of Program Manager at Public Policy Institute. Prior to the position of Program Manager at PPI, she worked as an Advisor for Project Preparation at the European Integrations and the International Cooperation Group in the Office for Cooperation with Civil Society of the Government of the Republic of Serbia. From 2009 to 2011, she was on the position of Project Manager and Media trainer in Novi Sad School of Journalism, where she was also conducting training for journalists in reporting on specific topics from the area of rule of law, security sector, fight against corruption and gender equality. In October 2011, she was a guest speaker at the Oxford University, as an associate on the project Media as a mirror of democracy in West Balkans, mentored by Professor Jan Zielonka, from the Department of European Politics at St Anthony College. Since 2007, she has been working with project teams of OSCE, the British Embassy, BBC and CFI on educating journalists and reforming the news content of the public service broadcaster RTV Vojvodina. In 2003, she was awarded the US State Department scholarship in the programme for young political leaders.

Anita Jankovic, BA in English Language in Literature, University of Pristine, and is a postgraduate in the same field, currently employed at the Faculty of Philosophy, Kosovska Mitrovica as a lecturer. During her employment in New Visions School, Anita performed excellently in the post of ESOL Department coordinator, within which she managed human resources, organized and held seminars, workshops, teacher training and education. She participated in Children’s camp “Skola prijateljstva” (“School of Friendship”) as a volunteer lecturer, within New Visions School’s cooperation with NGO Nasa Srbija.  In her long career dedicated to work with young people and their emotional and educational development, Anita has gained great credibility as a trainer and teaching expert.

Dragica Pantić, Communicologist graduated from Faculty of Philology, University of Belgrade, Department of Yugoslavian Literature and Serbo-Croatian Language, specialized in Communication Skills, at Sociology Department at Faculty of Philosophy, Novi Sad. She further extended her education at workshops and seminars organized by OK Management and Link Group agencies in the field of communicology, consulting, management, inter-human relations, and passed a three-year education with Dijada in commnicology skills, and within Faculty of Medicine expanded her knowledge of communication in health institutions. She has gained significant experience holding positions in Zarko Zrenjanin School (Serbian Language Teacher), Faculty of Medicine (Proofreader in Publishing Department, Publishing Department Manager, Lecturer), and Medicinski Pregled Magazine (proofreader for Serbian Language).

Nataša Smirnov-Veselinović , holds a BA in English Lanugage and Literature. She has a versatile, 10-year experience of working in local and international organizations, where her role focused on implementation of Quality Management Systems (ISO:9001 in Human Resources, ISO:14001, HACCP) staff development, internal communication, risk management, external communication in times of crisis, project management. During her five-year experience in Carlsberg Breweries, she visited Denmark, Poland, Germany and participated in various trainings with the aim of implementing international policies and upgrading operations in Serbia. These training sessions include QMS (AQA), Project Management (Adizes Institute), Management by Objectives (Consulteam), Risk Management (Carlsberg Denmark), Business Continuity Planning and Crisis Management (Clayton’s consulting). Since leaving Carlsberg, she has been committed to imparting her acquired experience and skill to perspective local companies. She is currently and Expert Consultant in New Visions School of Foreign languages, one of the biggest schools in the territory of Vojvodina, providing services both to individuals and corporate clients. She also works in a media monitoring agency Ninamedia, providing interpreting and reporting services for international clients, such as the U.S. Embassy, British American Tobacco, Gazprom Neft, etc.

Sorry, the comment form is closed at this time.